Famous Nautical Paintings – What do the Marine Painters Describe in Their Paintings? 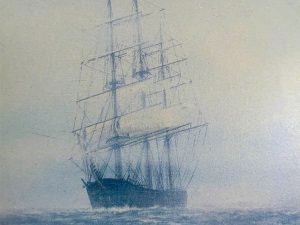 There is a particular direction in landscape painting and it is known as marine painting; it produced some beautiful famous nautical paintings, along the history. The water, in these works of art, can be seen in all of its forms: quiet and serene or, on the contrary, agitated and extremely dangerous.

These paintings will conquer you immediately. There are very few more beautiful things than the seas and oceans with the beauty of their waves, their fascinating spirit, the immensity and colors of the sky, shining in the sun with thousands of delicate shades, or boiling in the storm … Nautical painting enjoys a great popularity among art lovers.

The most famous marine painters

There are many well-known (and also less known!) painters who have been conquered by the mirage of the water and painted it: Russian painters A.K. Beggrov and A.P. Bogolyubov, English painter William Turner …  and how amazing was also the impressionist Claude Monet in creating the image of the sea, with sailing ships! And even Vincent Van Gogh sometimes painted beautiful harbors, in his unique style.

But one of the most remarkable artists of nautical paintings, and a great lover of the sea, (which is obvious in all his paintings) is Ivan Konstantinovich Aivazovsky. Many professional art historians and art sympathizers agree that no other marine painter can reach such a high level of mastery as he does. This artist lived in the nineteenth century and the first work he presented to the public is named “Study of the Air over the Sea “.

The most famous paintings of Aivazovski

Listing the names of all his nautical paintings is impossible, considering that he created about 6,000 of them, so we’ll just name some of the most well-known and appreciated.

“The Ninth Wave” is an impressive canvas painted in 1850, showing a stormy sea, people fleeing from the fragile remnants of a ship and a giant wave pointing toward them. Other very beautiful paintings are: “Moonlit Night in the Crimea”, “Bay of Naples”, “Venice”, “The Shipwreck”, “The Bay Golden Horn- Turkey”, “Sunset at Sea”, “Crimea”,  “Storm”, “Seaside”, “The capture of Sevastopol”, “Venice by night”, “Seacoast”, “Sveaborg”, “Neapolitan Lighthouse”, “View on lagoon of Venice”, “Capri” etc.

In Romannticism there was a reorientation in the style of marine painting. Representative for this period is the painting “Le Radeau de La Méduse”, created by Théodore Géricault between 1817-1819. The painting shows the moments after the sinking of the French ship La Méduse, when only 15 people survived out of nearly 150. The painting has become a symbol of French romanticism.

Besides nautical landscapes, there is also an impressive collection of marine portraits, many of which are hosted by the Greenwich Maritime Museum. The marine portrait appeared in England at the end of the sixteenth century, with the representation of the first amirals who were portrayed in 1558 in the fight against the Spanish Armada: Sir Francis Drake, Lord Henry Seymour, John and Richard Hawkins, Sir Martin Frobisher, George Clifford. The most significant of them is the Queen Elisabeth I fleet commander, Charles Howard, Lord Howard of Effingham, painted by Daniel Mytens, a Dutch artist working in England; it found its place among the most famous nautical paintings.