What Is An App Prototype? 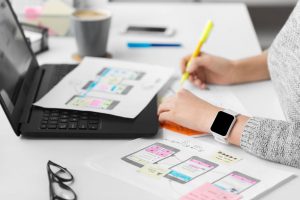 If we do a little research on the App Store or Google Play, we might be surprised at the huge number of apps we find there. Unfortunately, many of them are hard to use or are full of bugs. That’s why it is so important to make the most accurate prototypes and test them before launching applications on the market.

Testing the prototype allows designers and developers to find out what are the obstacles people are encountering while using the app. As such, they can determine whether the projected user-flow is easy-to-understand and easy -going, and what they can do to overcome major flaws in the functionality of the application at this early stage of the project.

What do we start with?

Supposing you have an idea for an application, once you have defined your target audience and determined the purpose of your application, you need to put your idea on paper. The simplest and most accessible way is “paper prototyping”. It is also the simplest method, because it only requires paper and a pencil. However, you need a certain level of knowledge to be able to create a quality prototype.

It is important to know information about the size of a Smartphone screen, but also to determine the size of the items that will appear on the screen. If you want the app to run in full screen, you can use a standard iPhone 320x480px template.

Before you start working on the prototype`s structure, one more aspect needs to be clarified: the user-flow. Each step that the user must go through has to be put on paper. Once you have set your route and basic functionality, it is time to sketch the layouts for each application screen. When you do this, keep in mind that each screen has important information to transmit to the users, so make sure this information is visible and accessible.

You need to be very careful about the items you put on the screen and where you put them, because there are usually a lot of items to use and limited space.

Once you are done with creating the elements you need, you can make a first test, using your colleagues or friends as test subjects. This way, it will be easy to identify the errors and outline the necessary changes, or even get some very good ideas about the interface, the layout of the elements, or the functionality of the application.

Prototypes can be created using specialized tools such as POP, Proto.io, Balsamiq, iRise or InVision.

POP is an application for iOS and Android, which is a kind of transition between paper prototyping and prototypes created with more complicated software. In practice, it is very easy to use: if you already have some templates drawn on paper, you just take a photo of each template and then add interactions. This way, you can create a low-fidelity functional prototype that can be tested. Testing is essential, because you can do a preliminary evaluation of the app`s functionality before you start working on a high-fidelity app prototype.

High-fidelity prototypes are very effective because there are some interactions that cannot be described. We can leave them to the imagination, but in the case of more complex interactions, we can detect errors more easily if we simulate how the application really works instead of just imagining it.